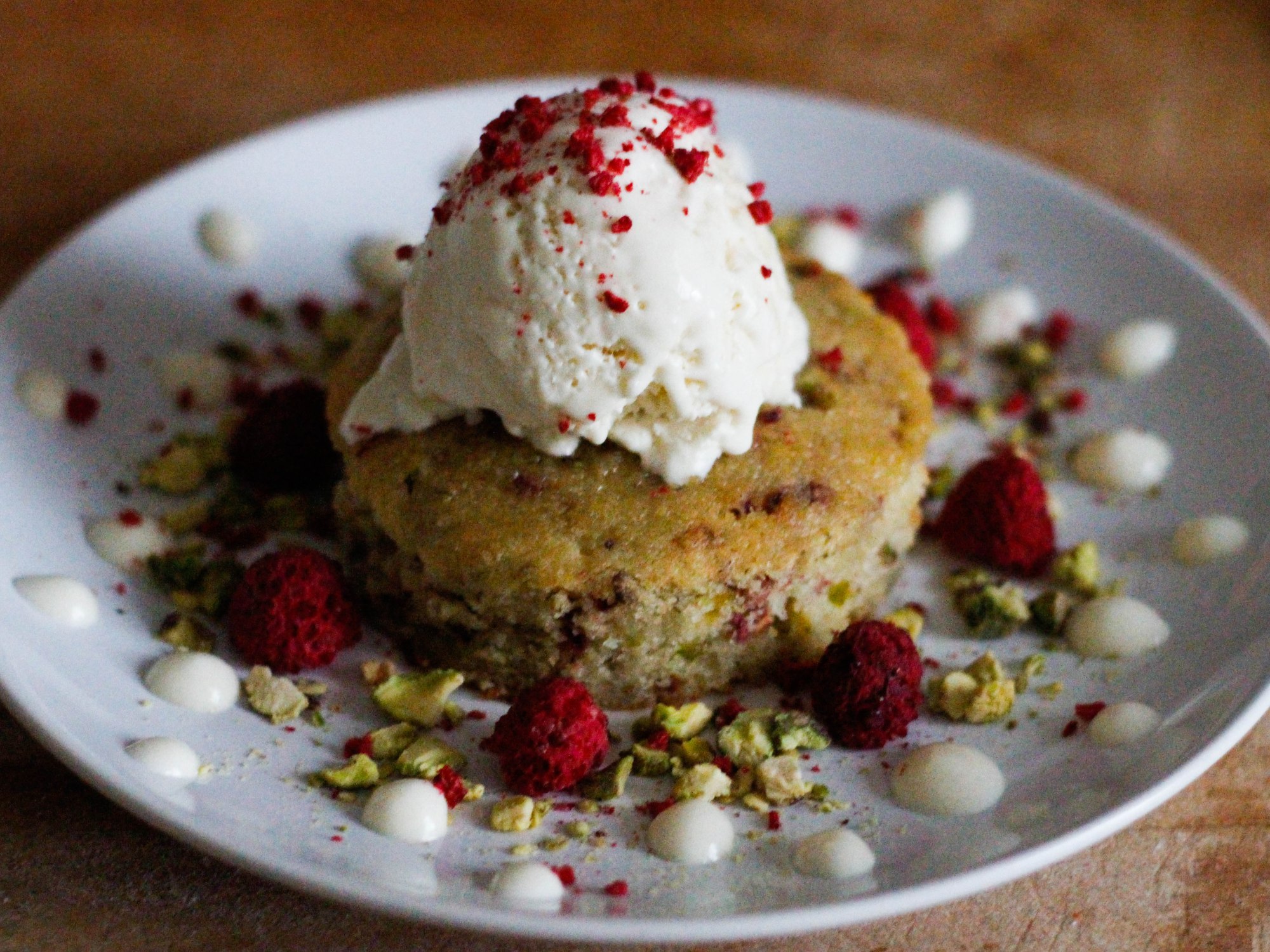 I have a confession to make. 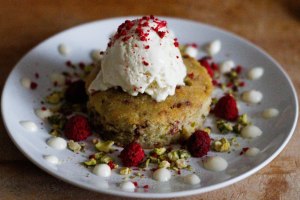 I have entered into a secret affair… 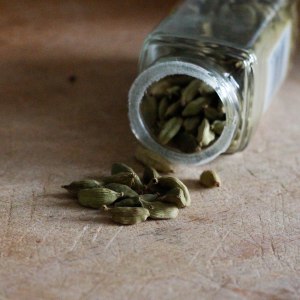 I am totally, utterly, shamefully obsessed, adding it to everything with unrestrained fervour.

I know I should not give my cooking over so completely to one spice, but I just can’t help it, I’m in love.

So, why the secret, you ask?

Well, my other half does not feel the same way about cardamom as I do.

In fact, he hates it. Along with cinnamon, cloves, and basically anything woody, to use his words.

Or, so he thinks he does…

He has actually devoured all that has contained cardamom as readily as a salted caramel cheesecake. So, I suppose it’s probably about time I revealed the truth.

This dessert was crafted for an Indian dinner party I hosted. Not an Indian dessert, clearly, but it fit well with the theme of the night, and there were no authenticity complaints from my group of London dwelling guests…

Indian inspired is the key word here… There’s no need to try and make everything perfectly by the book. In fact, the best part of cooking for me is experimenting and making something my own.

So, in saying that, you certainly could make this dessert without the cardamom if you’re really not a fan. I won’t judge, promise. 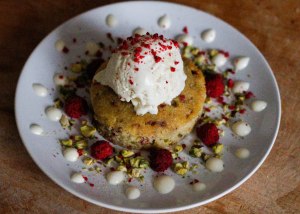 For the coconut ice cream

For the rose syrup

For the white chocolate & rose mousse

Note: I have used double the above recipe in the images presented in the method section below. The above ingredient quantities are more than enough for decorating your dessert (you will still have some to spare – oh no, what will you do with it!) but as a mousse on its own the above ingredients would make only two small servings.

For the rose & cardamom semolina cakes

For the coconut ice cream

Pulse the desiccated coconut in a food processor

and set aside – this step is not necessary, it will just make for a smoother texture. 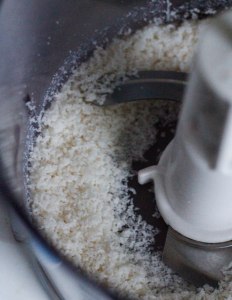 Combine the coconut cream, double cream and whole milk in a saucepan and heat to a gentle simmer. Meanwhile, beat the egg yolks and sugar together until light and creamy. 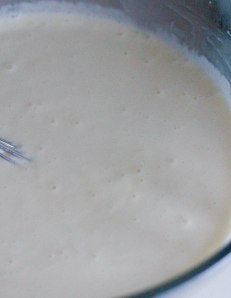 Pour the combined mixture back into the saucepan and add the dessicated coconut. Stir over a low heat until mixture has thickened and coats the back of a spoon. Remove from the heat and pour immediately into a freezer safe bowl, then cover and leave to cool.

Tip: watch the mixture carefully at this stage, if you heat too much or for too long, the eggs will curdle.

Once cool, place the bowl in the freezer. Every half hour, remove the bowl from the freezer and beat with an electric beater to break up the frozen pieces. Do this until the ice cream has almost set, then pour into a container and back into the freezer.

For the rose syrup

Place the orange juice, sugar and water into a saucepan and bring to a simmer. Reduce the heat and leave to simmer for ten minutes, or until the liquid has reduced by no more than half.

Remove from the heat and stir in the rose syrup, then pour into a jug and set aside to cool.

For the white chocolate & rose mousse

Whip the double cream and rose water to soft peaks, then place in the refrigerator until needed.

Place the chocolate and coconut cream into a bowl and leave to melt over a double boiler. Meanwhile, beat the egg yolk until pale and creamy. 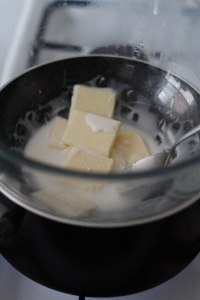 Once the chocolate has melted, beat it into the egg yolk while it is still warm. Leave to cool, then gradually fold the chocolate mixture into the chilled cream one third at a time. Place back into the fridge until ready to use.

Prepare a piping bag, placing it inside a tall glass and folding the edges over so that it stands upright, then pour the mousse into the bag, cover the top, and refrigerate overnight. 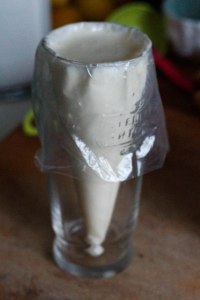 For the rose & cardamom semolina cakes

with butter and line the base with baking paper.

Grind the cardamom seeds to a fine powder using a mortar and pestle, then combine the ground cardamom, semolina flour, almond meal, chopped pistachios and baking powder in a bowl and set aside. 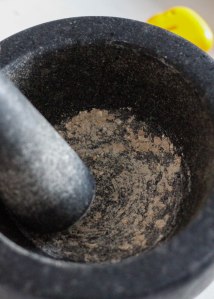 In a large bowl, beat the butter and 160g of sugar, then add the egg yolks one at a time, beating after each addition, then add the ricotta. 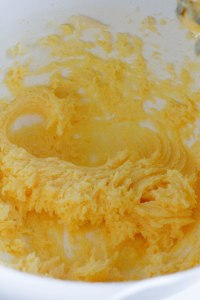 Fold in the dry mixture, then add the milk and beat until just combined. Fold in the freeze-dried raspberries. 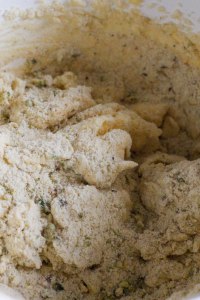 In a separate bowl, beat the egg whites to soft peaks, then add the remaining 15g of sugar and continue to beat until the peaks have stiffened.

Fold the egg whites into the cake mixture, taking care not to deflate the whites too much.

Spoon the mixture into your cake tins, then bake each cake in the preheated oven for 25 – 30 minutes, or until a cake skewer

Pierce each cake all over with a toothpick or cake skewer, then drizzle one tablespoons of rose syrup over each while it is still in the tin.

Leave to cool in the tin for 15 minutes, then remove the cake from the tin and place it on a cooling rack

Take the ice cream from the freezer at least twenty minutes before you serve dessert.

If you have made 4″ cakes, use a round cookie cutter just slightly smaller than your cakes to cut off the edges.

Drizzle room temperature rose syrup over the tops of each cake (it’s up to you how much you use, but I used about 2 Tbsp per cake), then scatter some freeze-dried raspberries and pistachios around the edge of the plate. 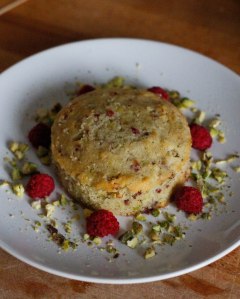 Take the white chocolate rose mousse out of the fridge and cut off the tip of the piping bag, then pipe small amounts of the mousse around the plate, decorating as you please.

Finally, place a scoop of the softened coconut ice-cream on top of each cake and scatter with a few more freeze-dried raspberries.