Every year in October my local supermarkets fill with beautiful golden orange pumpkins, giant orbs marking the beginning of the festive Autumnal season. And every year I say I should buy one, carve it into a lantern, make a pumpkin pie… But every year I say this, and every year I don’t. I see them, I admire them, I tell myself I will buy one next time, and then before I know it they have vanished from the supermarket shelves.

Growing up in Australia, we didn’t celebrate Halloween or thanksgiving. And even if we had chosen to, well, the pumpkins we get are usually of the green and speckled variety… Not quite the golden orb symbol of the festive season. In any case, pumpkin season where I grew up started in around February and finished in August… Not a very festive time of year… Although Christmas in July tried to become a thing, it never really stuck.

So pumpkins are not typically a festive food in Australia, but in saying that, I still had no trouble associating it with the festivities when I moved to the Northern hemisphere… Too much TV, perhaps?

This year I decided it was time to jump on the pumpkin band wagon. I played around with a few different foods, carving out a pumpkin and filling it with spicy coconut pumpkin soup, but my favourite recipe was for these spiced pumpkin cupcakes… Soft and fluffy, and topped with this incredible maple butter frosting.

Maple butter… oh, I don’t even think there are words for how amazing this stuff is. But seriously, every time I make it I wonder why on earth I would put myself through the strain of it. I was almost crying at one point this time around, thinking it was never going to change! But I had come so far and it was too late to give up… I had been stirring for so long, and all that glorious pure maple syrup was just stiff and sticky and not what I had been praying for… Just a little longer, I told myself…

And then, finally, it changed, and it was all worth it.

Yes, those two pictures are of the same bowl of maple syrup. Nothing has been added, aside from every ounce of energy my body contained when I started stirring…

Maple butter, or maple cream, is this smooth, creamy, silk-like substance made from pure maple syrup. In a nutshell, it is made by heating up pure maple syrup to the soft ball stage, cooling it, then stirring with a wooden spoon for like, half an hour, or until your arm falls off – whichever comes first. Grade A pale amber is best, I have heard, but I have had success with non-specific types – as long as it is pure!

I have outlined the directions below, but  America’s Test Kitchen is where I found the original recipe for maple butter – follow the link for detailed instructions. 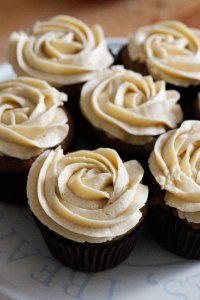 For the Pumpkin Puree

If you are making your own pumpkin puree I’d advise doing this the day before for best results.

Pierce your pumpkin all over with a knife, then place it in the microwave for ten minutes. Cut  the pumpkin in half once it has cooled slightly, then scoop out and discard the seeds and stringy pieces of flesh. If your pumpkin is soft enough at this point, scoop out the flesh into the bowl of a food processor. If it is still a little firm, place it in the microwave for a further few minutes.

Pulse the pumpkin in the food processor until you are left with a fine puree, then place a sieve over a bowl to catch the liquid and pour the puree into the sieve.

Cover the pumpkin puree with cling film, then place a weight on top (a stack of plates would do) to squeeze out the liquid. Leave to strain overnight.

Using a spoon, press down on the pumpkin puree in the sieve to squeeze out as much liquid as possible, but don’t press so hard that the pumpkin passes through the sieve!

Tip: if you’re a bread baker, reserve the liquid strained from the pumpkin puree and use it in your next loaf – it’s delicious!

For the Spice Pumpkin Cupcakes

Sift the flour, baking powder, baking soda, salt and spice mix, then stir to combine and set aside.

In a separate bowl, whisk together the oil and sugar, then beat in the eggs and buttermilk.

Add the pumpkin puree, beating until combined, then fold in the dry ingredients a third at a time.

Fill your cupcake cases about two thirds of the way up, then bake in your preheated oven for 20 minutes.

For the Maple Butter Frosting

Fill a large bowl with ice, then place another bowl inside so that it sits on top of the ice, then set this aside for later.

Pour the maple syrup into a saucepan with a candy thermometer and simmer until it reaches 235° F – temperature is important here, so try to be precise.

Pour the hot syrup into the bowl nestled over the ice and allow it to cool to around 100° F. 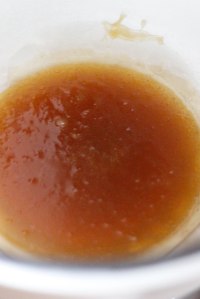 Now, this is the hard part. The syrup will now be very thick and sticky (almost solid on the outer edges from the cold!), and you will need to stir it with a wooden spoon consistently for about half an hour. Speed is not a priority, a constant motion is what’s needed. The syrup will begin to change from an opaque appearance to a texture resembling caramel. 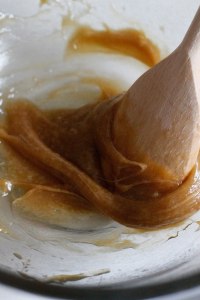 Once the syrup has reached a creamy, matte appearance stop mixing, it’s done!

Now, the maple butter might have been creamy and silky when you stopped mixing, but it quickly hardens into a crumbly fudge like substance. Don’t worry, this is fine! Place it in the microwave on a very low heat for about thirty seconds, then stir it with a metal spoon until smooth. Once it is smooth again, stir in the double cream.

If your maple butter is warm to the touch leave it to cool a few minutes before adding the butter – we don’t want the butter to melt! Once cool, add about half the butter and beat on a low speed, then add the remaining butter a little at a time as you are beating.

Quickly ice your cupcakes before you eat all of the frosting straight from the bowl – I used an open star tip for these cupcakes and topped with some spun sugar.