So I actually made these because I had some left over batter from another cheesecake – it was a serious overestimation(!) but a fortunate mistake, because they looked so sweet and tasted divine! 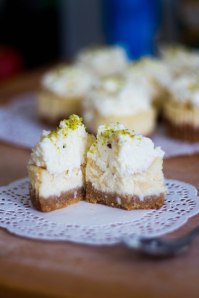 I wanted to create cheesecake cupcakes, so I used these sweet little polka dot cupcake cases but was disappointed with how they looked. No matter, the cases were easy to peel off and still served as a great vessel to cook them in!

Place the biscuits, honey, flour and butter in a food processor and pulse. I like the coconut to be fairly chunky, so I stirred this through after pulsing.

Line a cupcake tin with cupcake cases, and fill each case with a tablespoon of the biscuit mixture, pressing firmly into the base of the tin.

Bake for ten minutes, then refrigerate once cool. 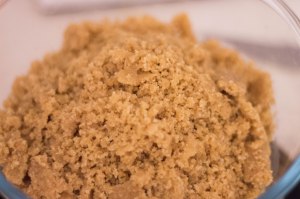 Beat the cream cheese until smooth, then add in the sugar, vanilla, and coconut extract and beat until sugar has dissolved.

Add the eggs one at a time and beat after each addition until just combined.

Sift in the flour, then add the sour cream and double cream and beat briefly to incorporate.

Pour the filling over your cupcake bases. The cheesecakes won’t rise, but you should still leave at least 1/2cm at the top of the cases.

Place the cheesecakes into your preheated oven, then immediately lower the oven temperature to 165°C/325° F/Gas Mark 3, and bake for 30 minutes, or until the cheesecakes are set, but still slightly wobbly in the centre.

Turn off the oven, leaving the cheesecakes inside to cool with the door ajar. Move to refrigerator once completely cool. 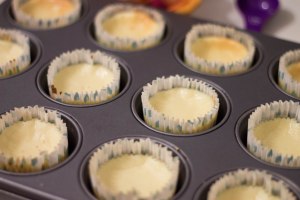 Whip the cream until it begins to thicken, then add in 1/2 cup icing sugar. Continue to whip just until soft peaks form – careful not to over beat!

Beat the cream cheese until smooth, add in 1/4 cup of icing sugar and beat again, then stir in the dessicated coconut.

Gently fold the two mixtures together.

Peel the cupcake cases off your cheesecakes, then take a teaspoon and place dollops of the cream cheese on top of each cheesecake cupcake.

Sprinkle with ground pistachio and serve. 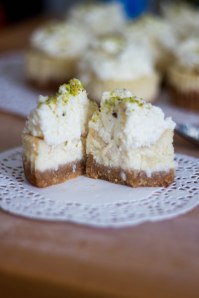